The Truth About Noise Nuisance, the Athaan and Church Bells

Noise Disturbance Complaint against the Zeenatul Mosque in District Six:

HELLO. I’M AUNTY PAT.
HERE’S THE The Truth About
Noise Nuisance,
the Athaan and Church Bells

In May 2019, in the middle of the holy month of Ramadaan, someone lodged a noise disturbance complaint against the 100 year old Zeenatul Mosque in District Six for the call to prayer, the Athaan. 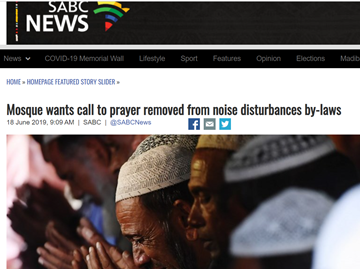 The City served notice on the Mosque after it conducted two tests – a decibel reading and what they called a “reasonable person” test.

Noise disturbances are regulated by the WESTERN CAPE NOISE CONTROL REGULATIONS promulgated in 2013.

Section 2 and 3 of these regulations prohibit noise disturbances and noise nuisances, respectively.

The regulations also provide that contravention of Sections 2 and 3 (being the prohibition of creating a noise disturbance or a noise nuisance) constitutes an offence.

Section 13 (2) of the regulations provides that a person convicted of contravening these regulations is liable to imprisonment of up to 2 years or a fine, or both.

The City of Cape Town exercises its powers to control noise disturbances and noise nuisances, as provided for in the Western Cape Noise Control Regulations, by way of the “STREETS, PUBLIC PLACES AND THE PREVENTION OF NOISE NUISANCES BY-LAW”.

The City is, however, empowered to exempt certain sounds or venues from the provisions of the Western Cape Noise Control Regulations.

This is provided for in Section 12 of the regulations and was confirmed to GOOD Member of the Western Cape Provincial Parliament, Brett Herron, in response to a question Herron posed in parliament. 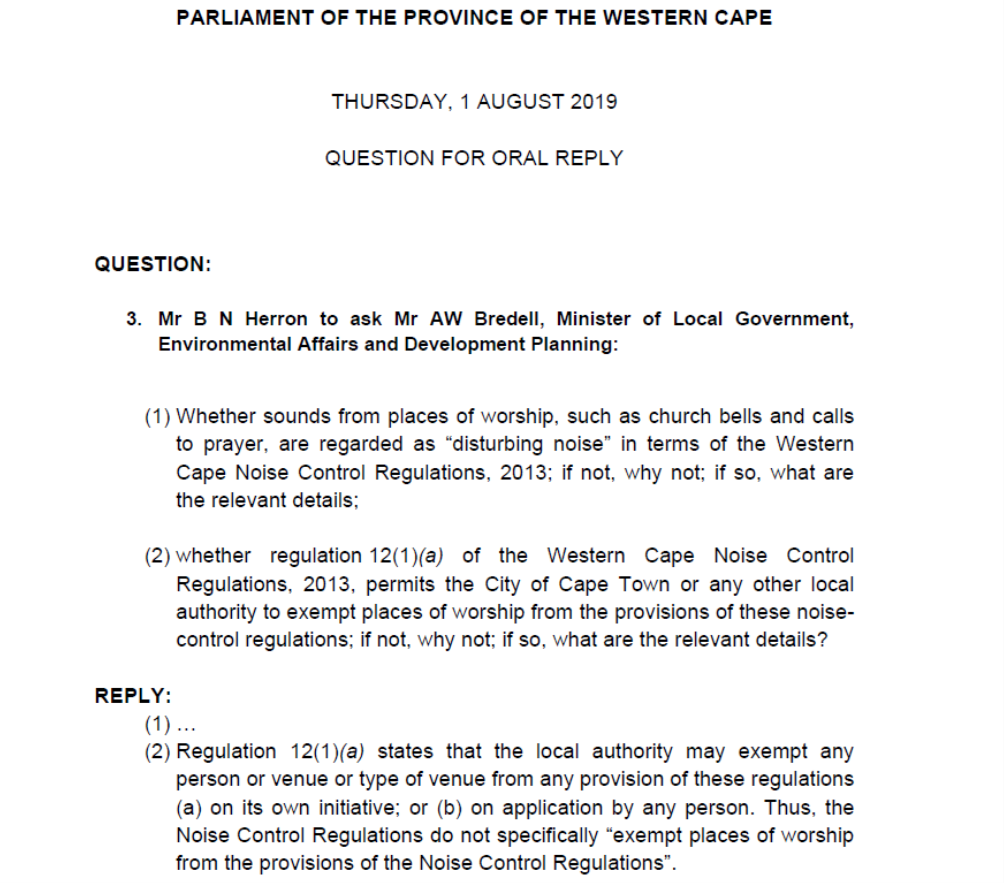 The Western Cape Noise Control Regulations determine what constitutes a noise nuisance and empowers local governments to take action when there is a legitimate noise nuisance complaint.

The City of Cape Town, and the Drakenstein Municipality, thus have the power to exempt Mosques and Churches from the noise control regulations if they choose to.

Following the complaint against the Zeenatul Mosque in 2019, and the righteous outcry over the City’s legitimization of a complaint that the Athaan was a “noise nuisance” the City’s DA leadership made a public commitment to include an exemption, from the noise control regulations, for the Athaan and church bells. In May 2019 the IOL reported that “in March this year, (DA) councillor Aslam Cassim recommended that the by-law be reviewed – this took place within a DA caucus. In April the City had few meetings because of the elections and could not follow up on the matter.” (“May noise by-law change after Muir Street Mosque’s call to prayer fallout?”) [See: https://www.iol.co.za/capeargus/news/video-may-noise-by-law-change-after-muir-street-mosques-call-to-prayer-fallout-23247796 ] This commitment was also made by the DA Mayoral Committee Member for Community Services, Zahid Badroodien to both Eyewitness News and on Voice of the Cape Radio Station. 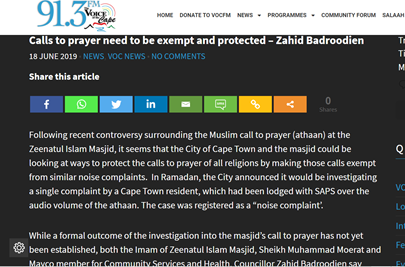 On 18 June 2019, on Voice of the Cape, Badroodien said “that a policy unit has developed a new proposal, including what it regards as necessary to move the City forward in terms of promoting and supporting diversity through religious and cultural integration and understanding.

Also, in May 2019, Mzwakhe Nqavashe, the DA Chairperson of the Safety & Security Committee in the City of Cape Town confirmed to New Frame (“Gentrification and the Athaan” 23 May 2019) that these proposed amendments were being considered and that he predicted a 60 day public consultation process on amending the bylaw would commence in February 2020 with the amendments passing in June 2020. 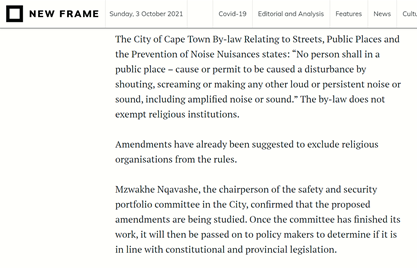 In 2020 when the amendments to the “STREETS, PUBLIC PLACES AND THE PREVENTION OF NOISE NUISANCES AMENDMENT BY-LAW” were published for public consultation GOOD Member of the Provincial Parliament, Brett Herron, submitted comments on the proposed amendments.

He pointed out that the 2019 commitment to address religious sounds as “noise nuisance” was absent from the proposed amendments and that the amendment of the by-law should include these exemptions as promised. 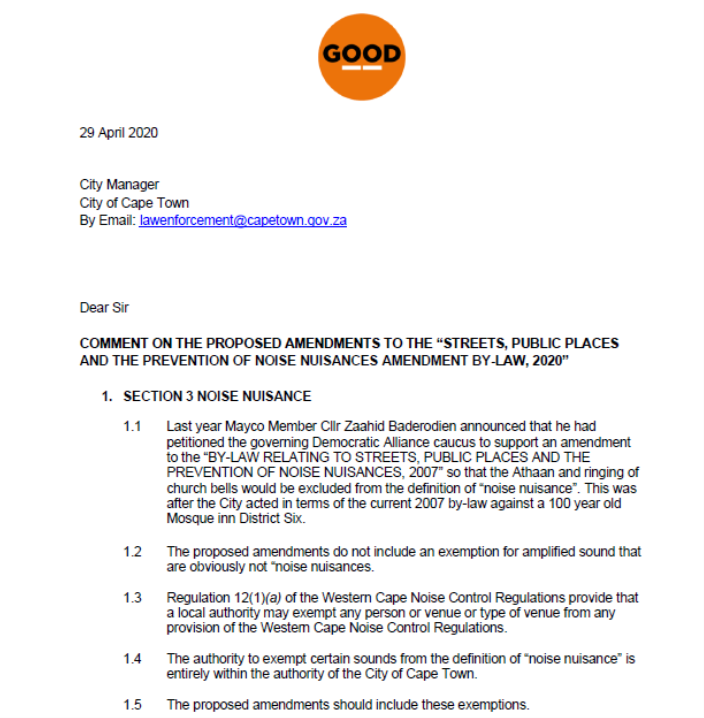 On Wednesday 29 September 2021, the DA led City Council adopted an amended bylaw. The amendments did not include the noise nuisance exemption as promised by DA councillors Cassiem, Badroodien and Nqavashe.

This leaves religious sounds, like the Athaan and church bells, vulnerable to being declared a noise nuisance and Mosques and Churches to being ordered to stop “making a noise”. If they fail to cease they will commit an offence and the responsible person will be liable to imprisonment or a fine.

That is clearly a harsh criminal consequence for a legitimate religious practice.

This is a gross breach of trust and the DA leadership have acted in bad faith.

The bylaw that was adopted focussed almost exclusively on legitimising the criminalisation of homelessness. That in itself is unconscionable.

But the failure to honour their commitment to the Muslim community, made in 2019, leaves the Athaan a potential “noise nuisance”.

An exemption would have been a simple addition of one line into Section 3 of the bylaw.

The City of Cape Town’s website currently includes “Church singing/bells” and “Call to Mosque” as examples of a “noise disturbance” – alongside Nightclubs and industrial noise. 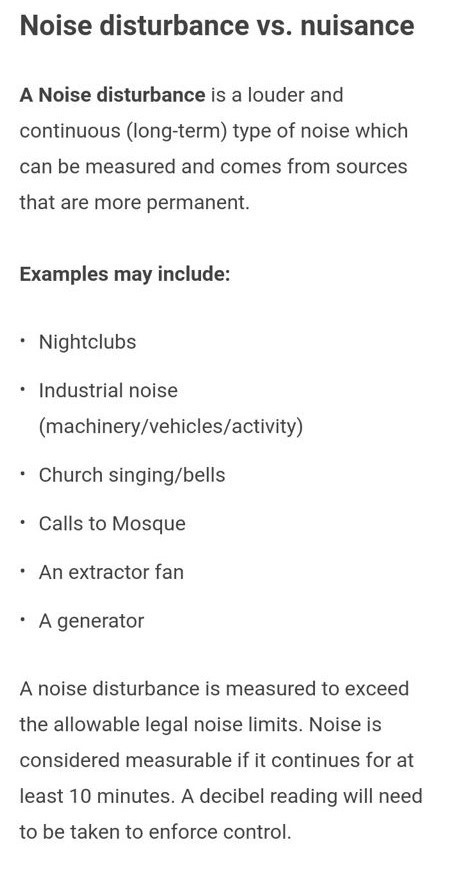